F What?! A Guide to Doodle Generations

If you’re interested in buying a doodle your head may be swimming by all the generation lingo such as F1, F2, F1b, etc. But don’t fret! We’re here to tell you what the F it’s all about.

Let’s start with what a doodle is. Whether you’re searching for a labradoodle, a bernedoodle, or any other type it’s important to understand that doodles are a “crossbreed.”

Crossbreeding is the result of two different purebreds being bred. 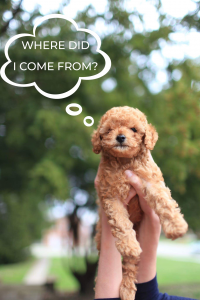 In the case of doods, that’s a Poodle + another breed. Doodles can also be “backcrossed,” but we’ll get to that in a second.

Let’s start with the parents of any doodle. For the following examples we will make our doodle breed a Goldendoodle, so a Golden Retriever + Standard Poodle.

Starting with the two purebred parents we have the “P Generation” which simply means 100% purebred. Just think of “P” generation as “Purebred” or “Pedigree” Gen. When breeding our 2 P generation parents, we get an F1 generation which simply means 50/50 of each P Gen, so in this case our (P) Golden Retriever + (P) Poodle = (F1) Goldendoodle. Simple right? 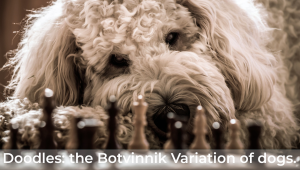 Now things are going to get a little trickier, but before they do let’s look at why they will. Goldendoodles and all doodle varieties are bred typically for the personality of one breed, Goldens in our case, and the hypoallergenic characteristics of a Standard Poodle. We’re not saying Poodles don’t have great personalities, we’re just saying they are bred to create doodles primarily for their coat attributes.

But here’s the problem: You’re not always going to get those coat attributes with an F1 doodle. In fact, the original breeder of labradoodles, Wally Conron, had a low success rate of hypoallergenic dogs and he was breeding F1s.

So how do you solve the issue for people who need low rates of shedding and dander when Goldens are so, so known to have high rates?

This is where backcross breeding comes into play. If you’re seeking the attributes of the Poodle, but you have a breed that is 50/50 (F1), what could you do? You could breed the F1 with another Poodle to obtain a 75/25 ratio of Poodle/Golden. This is called backcrossing and is denoted with a “b.”

If you’re like us, your head is still swimming, but don’t worry! We made a helpful chart to show the potential family tree of Goldendoodle types. 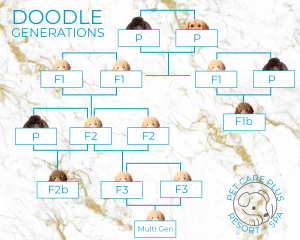 Backcrossing and all this F business is the same for any doodle variety. So if you’re looking for a doodle that won’t excite your sniffles, consider looking for breeders who use backcross breeding and be transparent about why you’re looking for a certain breed. As always, be sure to research your breeder and buy from states with healthy regulations. Scout’s honor won’t do.