Oodles of Doodles: The History of the Breed

“Doodle” has grown to mean many different Poodle crossbreeds and has become a catch-all term for any such dog. 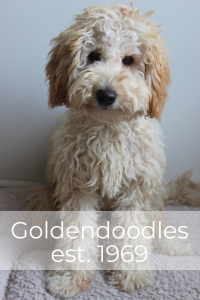 Just take a look at Chicago Doodles, one of our favorite groups on FB & Instagram, and you’ll find Sheepadoodles, Goldendoodles, Labradoodles, Bernedoodles, and so much more. But where did it all start?

In 1969 Monica Dickens, the great granddaughter of Charles

Dickens, bred the first “doodle” variety by breeding a Golden Retriever with a standard Poodle in hopes of gaining the benefits of each breed. Dickens sought the gentle nature of Goldens and the athletic intelligence of Poodles while bypassing the Goldens tendency to turn your floor into a shag-rug look alike.

In the 90s Goldendoodles took off and became a well known “designer breed.”

Designer breeds may evoke the image of a Gucci dog, but actually denotes intentional cross breeding of two purebreds.

By “design” a Goldendoodle gains many positive attributes of both breeds, but it doesn’t necessarily negate some less desirable traits like the high groom demand or common food allergies of Poodles or the energetic nature of both breeds.

In 1988, before the Goldendoodle exploded, an Australian breeder named Wally Conron was looking for the solution to a dilemma he had. Conron was breeding dogs for the Royal Guide Dog Association of Australia in Victoria when a couple in Hawai’i reached out

with a difficult situation. The wife, who was blind, needed an aid dog, but her husband had severe allergies. Conron first tried training the shed free Poodle to aid the woman, but 33 dogs and 3 years later, he was unable to train a Poodle as an aid dog. Conron eventually bred a Labrador and a Poodle, but he had another issue: no one wanted to board and train a non-purebred.

Now, you may know that in the early half of the century, Cockapoos and other smaller Poodle mixes gained a short lived popularity. The lack of their longevity could come from their less memorable name. Afterall, Cockadoodle doesn’t sound quite as catchy as Labradoodle or “doodle” for short. Conron knew this so he “went to [the] PR team and said,

‘Go to the press and tell them we’ve invented a new dog, the labradoodle.’

It was a gimmick, and it went worldwide. No one wanted a crossbreed, but the following day we had hundreds of calls from people wanting these master dogs.” And just like that Conron’s dilemma was solved and the “doodle” joined popular society, but not without cost.

Conron himself has often lamented the success of his breed. For one, not all doodles are hypoallergenic, and many are starting to pop up in the shelter system due to unaware families being sold dogs with empty promises. In fact, of the three puppies born for the couple in Hawai’i, only one was truly hypoallergenic according to lab results. In the next litter of ten, only three had hypoallergenic coats. And yet, despite this fact, many doodles are routinely sold as hypoallergenic without the science to back that claim. 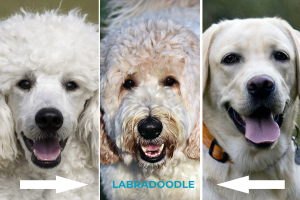 Conron has also stated “For every perfect one, you’re going to find a lot of crazy ones.” Labs and Poodles are both high energy breeds, but once word got out that they had been bred as aid dogs, people seemed to forget that. Afterall, Conron was incapable of training a poodle aid dog due to energy and temperament. Conron laments the popularity of making money off this new breed and ones like them which tend to lead to more breeding, more dogs, and more health problems as more and more people hop on the “breeder” boat especially in states with poor regulatory standards.

But it’s not all bad, and surely even Conron could admit that. By and large doodles are lovable, energetic, and fun dogs to be around. They don’t shed as excessively as the breeds they typically stem from and opening up the gene pool while getting people out of the mindset of “purebred or nothing” could be a positive thing for dog society. The important thing is to do your research when considering adding a doodle to your family. Research your breeder, research your specific cross breed, and understand what gives doodles the desirable traits you want. If understanding breed traits and genetics feels like a lot to learn on your own, stay tuned for our next article F WHAT? where we explore the types of doodle breeds available and how to determine which one is right for you.